Enough of admiring progress so far, there was much work to do and Christmas was fast approaching. I still had the cabin tank, deck, cockpit, gunwales, hatches, varnishing……to finish. How did I ever think this could be be done in a few weeks? My farther had primitive tools mainly of the hand variety, I think a Wolf electric hand drill was his most advanced item. Yet still he built the boat seemingly in less time than it was taking me working long weekends and most evenings even with a workshop full of power tools, to use the current vernacular “much respect” dad. 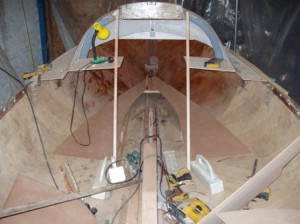 So the cabin tank blanks were cut out, small support ribs made and the tank side support carlins glued on before epoxying the assembly into the boat.

The tanks sides were cut out and fitted using clamps, screws and wedges to ensure that everything was as required. 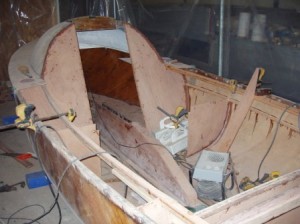 The main bulkheads that form the rear of the cabin had already been cut out as had the half bulkheads for the side tanks. These were now be fitted and glued in place. 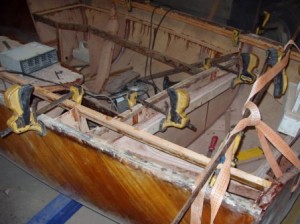 The seat carlins were cut to size and the main deck inner support carlin was laminated ready for fitting. This took some fitting as due to the deck panel shapes at the stern it was going to need an awful lot of twist. By using some of my longest clamps I was able to get the leverage to achieve the required twist and glue the deck beams in place. Additional strength fillets were used to ensure the structure was strong enough.

Again numerous clamps, blocks and wedges were employed to ensure that the 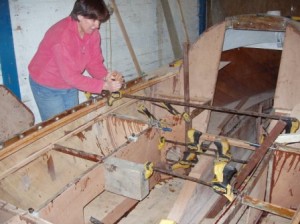 whole structure was accurately glued together. Once the main tank side structure was in place epoxy fillets were applied and just to be sure a couple of layers of glass cloth were applied to the joints. I think it will be strong enough for a long life.

It was then a simple but not necessarily short process of building the interior by fitting the ply panels to the framework and gluing it all together.  Once almost ready it had to be tested and “Peggies Perch” checked for comfort, it seemed to pass the test.

Alella is now really starting to look like a boat again with seats and decks.