To stiffen the hull I fitted the rear bulkhead. This was marked out carefully then cut 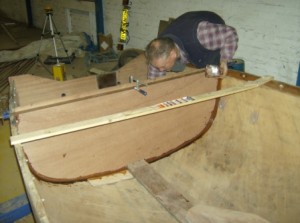 out by jigsaw. Once it was near to shape it was possible to very accurately mark the shape using a spacer along the lines of a jigger stick (is that the right term?). Whatever it worked and the bulkhead sat snugly in place. It only remained to glue and fillet both sides with epoxy resin and fillers.

The hull was now rolled over using old mattresses to protect the hull. It was really easy especially when you have the strength of several lads from the next door fabricators Steel Framed Structures (http://www.steelframestructuresltd.co.uk/) who made light work of boat movements like this – thanks Steve, Mick, Phil and the lads. In between helping me they also did some pretty impressive steel fabrications. 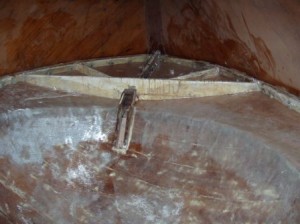 With the hull upside down it was easy to fibreglass the inside of the cabin and foredeck. A thin glass layer on most surfaces but triple 200g cloth to strengthen the foredeck to cabin joint. This was done as multiple overlapping strips that also got the fibres running across the joint. The fibre-glassing was being done as a trade off between weight and the longevity of the boat as it should protect and strengthen parts of the original boat that had really suffered over its previous use.

The next task was to sand the outside of the hull to ensure it was really smooth. All the drips and runs from the repair works were removed and the boat started to look

good. As time had been passing it was now getting much cooler so a tent had to be built to keep the boat warm while it was varnished. It was quite cosy inside the tent and the serious business of protecting the hull began. 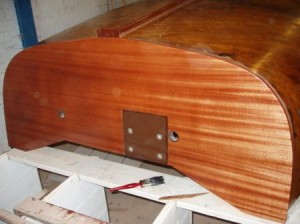 sound hard base for the 2 pack polyurethane varnish that was to follow. First I had to give the boat a light wet and dry sanding to remove the bloom from the resin coat. Alella was already starting to look stunning. This gave me hope that she would be finished on time but the plan was very tight especially as the temperatures had dropped 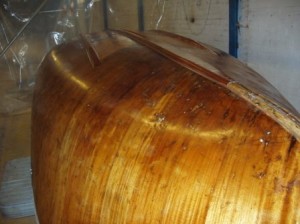 which slowed things up a bit.

At long last the results of my efforts were showing results, I just stood back and admired how beautiful the boat looked, she had really scrubbed up well. The new transom looked really good with the wood grain standing out brilliantly. I have to admit that a glass or two of Rioja was taken to celebrate this milestone in the rebuild.