With the transom and centreboard case complete the attention now turned towards the cabin and foredeck.

cut the foredeck plywood to size as it was easy to mark it out when nearly flat. Once the foredeck was cut to size it was time to refit the cabin. This had been stripped and the galvanised steel beam wire brushed to remove rust and then painted with zinc rich paint to protect it into the future. It was amazing how it was in such good condition after all those years in the salty atmosphere of West Cork. 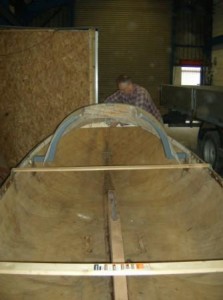 Fitting the cabin required a few alterations. As it was nearly 100mm further forward than it had been. Interestingly this was much closer to the position of the rig on the Fairey Falcon. The first requirement was to fit new hull wedges that would take the bolts holding the cabin beam in place. These were cut to size and glued in place. The second alteration was to shorten the main foredeck beam  to fit just behind the stem. A thin tufnol plate was bonded onto the outer surface of the hull to cover the old bolt holes and provide surface for the new bolts to pull up against. Once these modifications were complete the cabin was bolted into place. 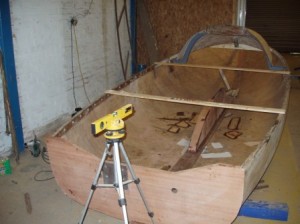 bolted it up the whole of the boat and the cabin were aligned perfectly. Thus it was possible to make small adjustments until the mast position was absolutely vertical in the boat and that the measurements from side to side were identical.

The foredeck beams could then be refitted hardly needing any modification. When 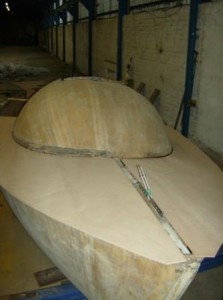 the foredeck plywood blanks were offered up the look of the boat as I remembered her was very obvious. The new plywood also allowed the cabin to be marked and trimmed so that it just met the deck. When originally built the construction relied on a wooden perimeter beam to support the deck but this had always been troublesome due to movement in the timbers from people walking on the foredeck causing cracks that let water in from which rot set in. My plan is to fibreglass the joint from both sides to create a ply reinforced plastic foredeck. This will also give more headroom in the cabin at the expense of additional weight. 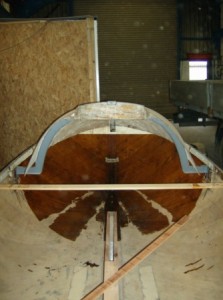 more pleasant to do this when good ventilation was possible, it also saved me from having to work in a mask a joy I was to experience a lot later on. The strips left blank are where I would fit a low tank in the cabin to provide seats, keep the water (which will always get in) in the middle and provide some reserve bouyancy.