Alella has been associated with Turkhead since the early 60’s. She was built in 1962 by Gordon Townend who used a Fairey Marine Falcon hot moulded hull and built the interior and its distinctive wooden cuddy on the drive whilst three wild youngsters (my brothers and I) got upto various mischief.

At this time our family had started to holiday in West Cork and Alella was taken over on the Innisfallen ferry as she was ideally suited to sailing around the Carbery’s Isles. We sailed around the islands on her in the days before ribs and high powered speedboats. Alella proved to be a very safe and ideal sailing boat for the fantastic sailing area that is Roaring Water Bay. After nearly 50 years and not enough maintenance she was in a sorry state. Not sailed since the start of the new millennium she was lying in a barn quietly gathering dust.

Then on a fine July day in 2009 we took the punt out to Middle Calf, a really beautiful island. On the way we stopped to see the seals off the Tourane rocks. This idyllic day was spoilt for me by the noise and vibration of the outboard. Memories of quietly sailing around the islands in peace and harmony with the surroundings flooded back for me.

When I got back to Turkhead that evening I slipped out to the barn to see Alella under her cover. She was in a rather sorry state. However a “Baldrick” type plan was forming to rebuild her, but was it sensible?

So after dragging an old trailer out of the brambles and getting the local engineers in Skibbereen to fit new bearings there was half a chance that we could get the boat back to the UK for a refit. The boat was loaded onto the trailer and readied for her return. My mother took many photographs perhaps thinking that this was the last she would see of the boat. 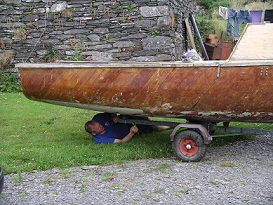 After an uneventful drive back to the Midlands, Alella awaited the start of her rebuild. At this stage none of us knew what was in store. Over the next few weeks I will record the story of how Alella was rebuilt and came to sail around the islands in West Cork again.