The first stage of the rebuild was to get the hull stripped of old varnish, the cabin removed and to repair old damage and rot.

The hull was stripped using both Nitromors stripper and a heat gun and scraper, it is 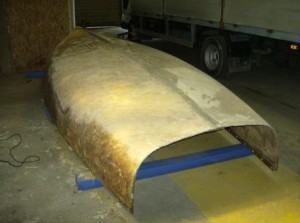 difficult to be sure which method worked best. In some areas the stripper method worked well even if it needed to have repeated several times to overcome the very old varnish layers. Both methods are not ideal as using the stripper one is always concerned that all traces are washed away before repainting and I was especially concerned of stripper lodging in cracks. This part of the work is non very pleasant and always takes much more time than anticipated. Working with the heat gun also needs care so as not to burn the underlying wood whilst still getting the varnish to bubble and be ready to scrape off. Keeping the scraper sharp also proved to important in getting a good result.

The original hog was removed, this was very easy as along most of its length you could see gaps between the hull and the hog. This allowed me to prepare the hull for a new hog that would be glued and screwed into position.

Once the old varnish had been removed it was time for sanding, for this I used a Bosch vibrating orbital sander which with about 120 grit paper cleaned up the hull relatively easily. 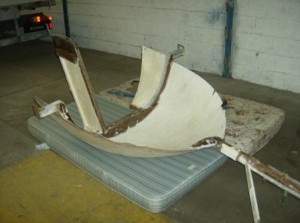 boards to a centreboard. The boat had never sailed to windward well which led to much frustration as all our family raced dinghy’s extensively so liked a boat with a good sailing performance. I felt that the original reasons for the twin dagger board configuration namely removing the centreboard case to give more space in the cockpit could be largely overcome within the original design framework. Calculations showed that the mast would have to move forward 100mm (closer to the original Fairey Falcon position) to keep the sailing balance. The slight reduction in cabin space was not considered a problem as the cabin was used mostly for dry storage rather than sleeping quarters for three boys. As it turns out there is still space for two adults to sleep in the cabin but it’s not quite the Ritz.

All of this work meant that I had to prepare the old dagger plate slots in the hull to be re-laminated using new Agba veneer. This was done by carefully routering back in steps an area around the slots to allow new veneer patches to be built up with a good overlap for each patch to ensure the repaired hull was as strong as the original.

I was staggered to realise that this preparation work had taken six weeks. It does not seem much when you look at how little the boat seemed to change.  It was also amazing that after nearly 50 years the hull was in such good condition. There was softness in some areas such as around the old bilge keel slots and even some evidence of worms. As these areas were being re-laminated this was not a problem and for the few other areas a good coat of epoxy resin would soak in and make these bits as sound as the rest.