As already mentioned upon my return to the UK the transom fell out after the most minor of taps. On reflection this was not surprising as over the years it had taken some bashings. The first that I remember was while the boat was being trailed in the UK, I think to Anglesey but am not sure, my father stopped by some narrow bridge and then there was an almighty bang. The car behind had not stopped and his big spotlight had cut an almost round hole in the transom. I think the trailer was bent a little as well. The hole was repaired with copious amounts of glue and this lasted for years. Some time later as this was not very attractive a new marine ply transom was fitted, and this was the one that I knocked out.

I had decided to make the transom slightly thicker as I had noted that the vibration of the motor had almost shaken the rear of the boat to bits. For Alella’s first 30 years it was almost unheard of to even carry an outboard, I can testify to this with memories of having had to crawl over the rocks by moonlight to pull the boat up the channel against the tide but that is a story for another time. Thus this damage had been done when my parents, by then in their 70’s had used the boat under engine much more. I therefore designed the transom to be much stronger and easily capable of shipping an outboard so if this use was required again then she was ready. 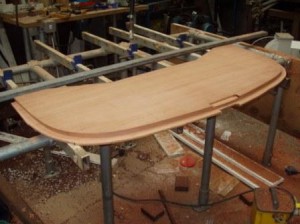 realised that I could easily router a rebate on the mahogany transom to fit the hull so that the transom would cover the aft end of the hull laminates. This was done using a 16 degree dovetail router which proved to give a nice land for the hull to sit onto when assembled. So I glued three bits of wood together, sanded the assembly flat and cut out the rough shape. The routering was done and I ended up with something that looked like a transom.

Once I had got the blank I drilled a couple of drainage holes for the rear deck which were lined with tufnol so that they could double as mooring fairleads and tufnol outboard mounting blocks were machined and glued and screwed into place on both the inside and outside of the transom. 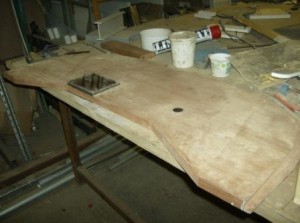 This was perhaps the first serious woodwork I had done for a while and I was really pleased that it came out so well, I had forgotten how much enjoyment came from creating an object from bits of wood. This was despite the absolute terror when routering the rebate that something would slip and leave a great gouge across the inside. I think this joy of working with wood also started to influence my ideas for the rear compartment hatch which suddenly was to be laminated at all sorts of strange angles.  More of this in later posts.