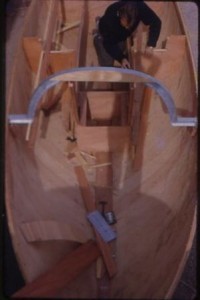 Alella was built in 1962 on the drive of our home in Wolverhampton by my father Gordon Townend. He must of had the patience of a saint to put up with the help from his three young sons!

I can just about remember the bare Fairey Falcon hot moulded hull arriving wrapped in a big polythene bag after being trailed up from Fairey Marine in Hampshire. Most of my other memories are fairly vauge other than the cabin being cold laminated using Aerolight glue on the kitchen table. Families especially my mother must have been very accommodating in those days. One old memory that I can still remember was the smell of the hardener which was pretty much an acid the way it fizzed when spilt on the garage floor.

I can not remember the actual sequence of build but appreciate that with hand tools and all the brass bolts that were used in the build that it must have been very painstaking and hard work. It is only much later after I rebuilt the boat in a workshop with band saws, mitre saws, router tables and under-clamping assembly tables do I truly appreciate the skill and effort that went into the original build.

One notable element in the build is the galvanised steel beam that supports the cabin and all the mast loads. This was still in good condition when I rebuilt the boat in 2009 so all I had to do was wire brush and repaint with a good structural steel zinc rich paint to bring it back to looking like new. 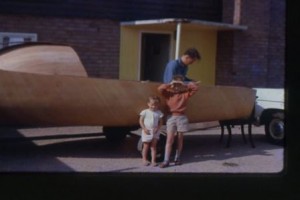