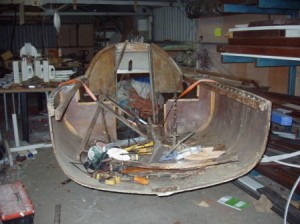 Having arrived back from Ireland in mid July full of enthusiasm for getting Alella rebuilt and back on the water I started to poke around a little to try and ascertain just how much work was needed. The first thing I did was tap the transom which promptly fell off – how it had not fallen off whilst being towed I still do not understand. This was put to one side as it would make the basis of the template to machine a new one. 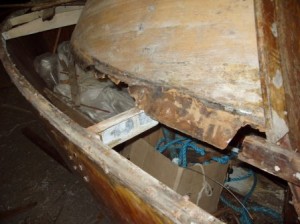 I at first thought that I could get someone to do the rebuild for me but after two boat repairers looked at the state of the boat they disappeared never to be heard from again. It was at this stage I had the fateful thought “If my father could build the boat on the front drive why could I not do the rebuild in my evenings and weekends” I think the phrase “Simples” current at that time also got in the way of rational thought.

So I started to plan, the decks would need to come off, the cabin removed and then the hull stripped of varnish. The hog would need to be removed and replaced. I had also thought that the two bilge keel dagger plates originally used should be replaced with a centreboard similar to the ones I had on my old Salcombe Yawl http://www.syoa.co.uk

The foredeck was removed and all the rotten timbers striped away. The wood removed made good kindling for the fire at home. After sanding the cabin looked in remarkably good shape except around the bottom edge where it had joined the deck.

Thus the stage was set and we embarked on the rebuild which proved to be an interesting time. The amount of work involved exceeded my estimation and then some. I still can not quite work out how my father built the boat with only basic hand tools and without the use of epoxy systems. My admiration for his skills greatly increased the more I got into the project.

I prepared some drawings based on the original Fairy Falcon Association leaflet and measurements taken from the boat. After a little work I was able to estimate the timber that would be required and got an order off to Robbins Timber in Bristol. http://www.robbins.co.uk  Robbins were very helpful and duly delivered the planed timber and marine ply ready for the reconstruction to begin. 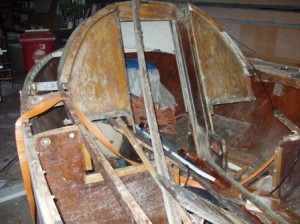