The varnishing and painting now complete it was time to think about getting the rig fitted and another million little jobs that still had to be done.

One task that did take some time was sorting the major issue I had created by not wedging the case opening in the middle of the slot. This had allowed the slot width to close in by about one millimetre on each side with the result that the centreboard would not fit. At each end it was fine, so I had to sand the area in the middle using a board with sandpaper attached to get the slot width just bigger than the plate thickness. I cursed myself more and more at how long this took but eventually it was finished and the Centreboard fitted. Epoxy and varnish protected it all. A lesson learned, don’t assume that a long section will glue up straight without clamps or support, I will not be making the same mistake again.

When considering the launching and recovery in Ireland I had decided that a break-back trailer like the one I had built for my Salcombe Yawl was needed. I was fully intending to have another new one made when I remembered that when I sold my Yawl the new owners had not really wanted the trailer as they would have the boat looked after by one of the many local boat service organisations. A quick phone call and the deal was done so after a day trip to Devon I had a new trailer. This needed minor modification to the load bearing rollers to fit Alella and was ready to go.

Now with trailer and boat complete it was time to go to P&B in Northampton. They had made some new sails and fitted out a new mast for Alella. So on a cold grey December day I travelled down to Northampton to a warm welcome from Alan Bax and his team who sorted everything so I could leave with the rig ready to go. All I had to do was drink coffee and watch. Great thanks also go to Tom who organised everything including the specification for the mast and sails. All the help was much appreciated. The ease with which I was able to set up the rig for the first time was a testament to the care taken by P&B.

The P&B sails were also a great talking point in Ireland, such as when we docked at the Sherkin Island pontoon just behind a large sailing cruiser and immediately got into conversation with the owner regarding the boats we had raced and events attended in the past.  All because he was intrigued by the sail logo on what was obviously a cruising boat.

finished, the rudder blade being varnished and all the hatches to be bolted on…….

Well the day of return was now almost upon us so I packed Alella up for the journey. I also had to find a way to take the trailer that I had used to bring her over from Ireland back again. 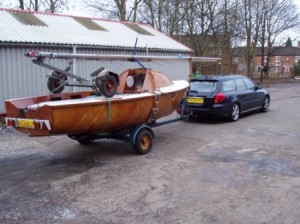 This old lightweight trailer would certainly not have taken Alella now she was fully fitted out. Once packed up she certainly hid some of her elegance with all the bits and pieces lashed on. 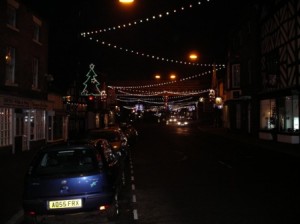 The time had come to depart so we drove off leaving the Shifnal Christmas lights behind. I looked back over the last few months and was quietly satisfied with the results. Would I have done it again – YES, it is some time since I have worked on a project that gave such immense satisfaction.

Early the next morning, as Dara, Alella and I left Manchester aiming for the ferry in Holyhead we were greeted by a blizzard. The M62 was all white with no lane markings visible and heavy snow driving across the road. Worries about reaching the ferry on time or even worse ending up in a ditch surfaced. Luckily my trusty Suby took it all in its stride and kept up steady and safe progress, sometimes the four wheel drive does come in useful. As we passed Conway the sun came out and we enjoyed the rest of the trip along the coast to Anglesey on a bright winters morning.

Arriving at the ferry in good time, why had we worried, Alella could almost feel she was on her way back to West Cork and with non of the indignity of being craned on and off that she had had to endure back in the early 60’s.