Having made the new transom and centreboard case I looked forward to fitting them to Alella’s now fully stripped hull. I had made some cradles to support the hull in an upright position which ensured that the hull was well supported.

The fitting of the transom was done first so as to stiffen the hull and ensure its shape was maintained as in its bare hull state it is quite floppy. Before I had removed the old cockpit structure I had screwed battens across to hold the width 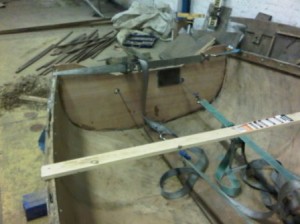 correct. The transom just dropped into place with the aft end of the hull laminates fitting into the rebate in the new transom. It was only necessary to ensure light pressure using straps to prove the dry assembly was square and fitted all round. Once these dry checks had been completed it was time to mix the epoxy and wet out the joint before adding the fillers to create a paste that would fill some of the minor gaps. Having assembled the transom into the hull after gluing, then removing the excess resin squeezed out as I lightly tensioned the lorry straps I checked the squareness and alignment again, you can never be too sure and its difficult to alter once the resin goes off. One note of caution when using the lorry straps, they can exert considerable force and I could have bent the boat significantly if I had ratcheted the straps too tightly.

Once the transom was securely in place I prepared a filleting resin mix and applied a good fillet to the inside of the hull to transom joint. Once again I added some sawdust to the mix to colour it similar to the wood of the transom.

At long last the hull started to look like a boat again. I had to be careful that I did not spend too much time just admiring the boat as there is still a lot of work to do.

I then moved on to preparing for the fitting of the new centreboard case. This was the 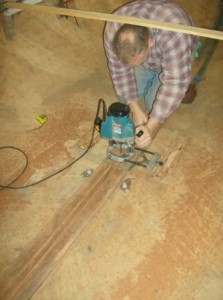 last chance not to change the design of the boat from its original configuration so a little reflection on pro’s and con’s of the change took place. This strengthened my belief that the change was the right one, I would have to wait until the boat sailed to know if it was correct.

The first stage was ensuring that the new centreboard was accurately positioned in the middle of the boat and absolutely fore and aft. As I intended to use the edge of the inner hog as the guide I had to prove that this was centred on the boat centreline. Thankfully it proved to be central which made the next part much easier. Using the longest router cutter I could get I started to cut grooves in the hog, working slowly taking out about 5mm per cut the slot started to take shape. As we got deeper great care was taken to ensure that the router stayed level and did not kick. Then the first major cock up became evident, despite the screws holding the hog having been carefully positioned to allow the slot to miss them, unfortunately the router was catching the inside edge of the screw heads Durrrrrrrr. Luckily the stainless screws are slightly softer than steel so the router cut through but was only fit for the waste bin when the job was finished. 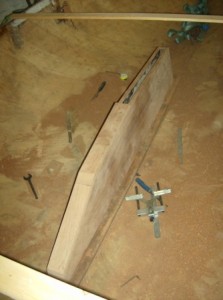 dry assembly, case and boat went together beautifully. The alignment was checked with our laser level sight and all looked good. Everything went together really well, so now it was time to mix the epoxy and fillers ready to glue it all in place. Once glued a final check of alignment showed a slight pressure was need from one clamp to ensure the fix was correct.

Unfortunately my lack of experience showed here as although it went together fine when dry and the centreboard fitted the slot I had underestimated the hydraulic pressure of the glue on assembly which forced the middle of the case inwards by about 1mm on each side which meant I had to do a lot of sanding inside the plate case later on the to get the centreboard to fit. This could have been prevented by fitting a wedge during the the gluing operation. Let my mistake be your experience. 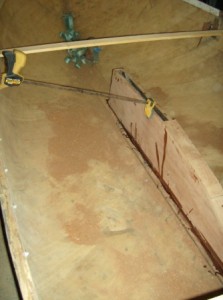