April 2010, the clan had gathered for Peggy’s graduation and the moment of truth for Alella, how would she sail? Preparing the mast and sails was easy, everything went together as expected. I had a slight problem working out how the spreader adjusters 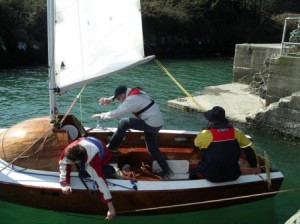 worked but the internet is great for getting information and solving this minor issue. In short time Alella had her new mast stepped and the sails rigged ready for the “Test Crew” the three intrepid mariners. Sails up leap aboard and off we set, would the balance be good, what would she feel like once being driven by the wind? 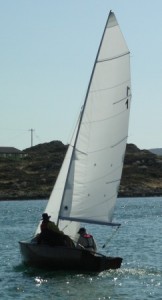 I should not have worried as Alella positively leapt forward as the sails were trimmed to the wind and once again Alella was in her element riding the waves. After a short sail up the river and back again the first expedition was planned, a sail around Baltimore Harbour. 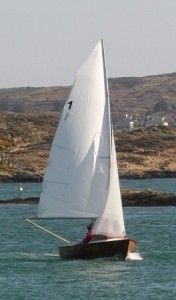 A change of crew and off we set. The wind was now fresh so all to windward for the beat towards the Beacon. Everything worked and and Alella was easily manageable in the conditions. After a good beat to Baltimore Harbour a quick check was taken and the first disaster discovered – none of us had any drinking vouchers so we could not stop for a quick one in Bush’s Bar. Thus we sailed into the harbour looked around and sailed out again. Now heading for the gut as the tide  was high enough for this route back to the slip at Turkhead.

We quickly slipped through the narrow passage and out into the inner bay before charging out into the river Ilen. Here the friendly seals quietly watched us go past, did they remember Alella from the past. In their normal inscrutable way they kept this to themselves.

Back to the moorings at Turkhead very much pleased at how well Alella had sailed.

Moored up and all stand back to admire. Tomorrow a voyage was being planned to Schull and back. One crew to sail there the relief crew to drive round,  have lunch and then sail back. This would be a good test of how Alella sailed in the bay. Well enough for today as evening crept up we all retired to the roaring fire for a celebration and to look forward to once again being able to sail around the islands in peace and in harmony with the surroundings.